byadmin
You are here:
← All Topics

Did you know that tweets with hashtags generate twice as much engagement – which includes clicks, retweets, favourites and replies – compared to tweets without?

Hashtags have become so popular that most social media platforms now feature them. But beware – they work differently on each network. So, to help you get the most out of hashtags, we’ve created this beginner’s guide where we’ll explain what hashtags are and how to use them to their full potential on networks like Twitter, Facebook, Pinterest and Instagram. We’ll also give you some tips on how to create your own hashtags.

This is how a hashtag looks: 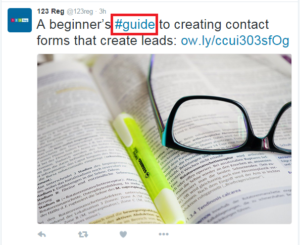 So whenever someone adds a hashtag to a post, the social network indexes it and makes it searchable. When a user clicks on a hashtag, they’re sent to a page that aggregates all posts with that hashtag like in this example below: 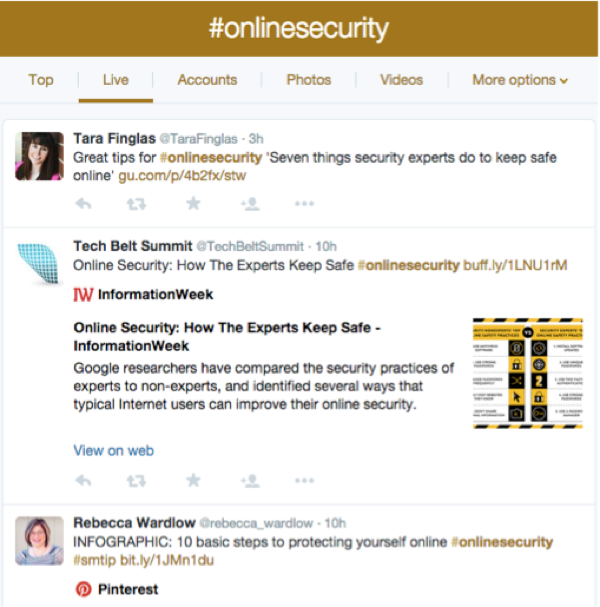 So why use hashtags? They’re a great way to tag your content and to increase the chances of your target audience finding it on social media. Think about it – what better way to filter social media buzz and gather your audience around topics of interest than hashtags?

As a small business, hashtags can be a powerful tool to help you:

How to use hashtags across social networks

While one hashtag may work for one platform, it may not work for another. Each social network is different when it comes to how hashtags are used and how to make the most of them. So let’s get into the specifics of using hashtags on each platform.

Twitter is the home of hashtags, which means that if you want to be part of a larger conversation with other users you need to be using them. People use hashtags on Twitter to tag and categorise information under a specific topic.

When used correctly, hashtags on Twitter can drive heaps of traffic. While only 10% of tweets include a hashtag, 40% of tweets with hashtags get retweeted.

Nonetheless, using hashtags on Facebook can help expand your post’s reach, which is now more important than ever considering Facebook’s algorithm changes have resulted in a smaller and smaller reach for posts published by business pages. In addition to this, adding hashtags to your posts on Facebook can also help you to connect with your target audience. You can use them to discover and join conversations with people who are talking about your business, or about topic related to your niche industry. It can also make your posts easier to discover when people are searching for a specific topic.

Similar to Twitter, clicking on a hashtag on Facebook will take you to a page with posts containing the same hashtag. You also have the option to filter the results by Top posts, People, Photos, Pages, Places, Events.

When it comes to the number of hashtags, it’s best to keep them to a maximum of two hashtags as adding more can lower engagement.

Even though Instagram is hashtag paradise, don’t go overboard. Try to avoid adding more than ten hashtags per post.

While not as popular as on Twitter or Instagram, using hashtags on Pinterest can help rank your content higher in search results. Use them to describe the topic and the content of your pin so you can then get in front of people who may not have seen your post otherwise.

You can also use a special hashtag to brand your Pinterest page. This can help an idea or a new product catch on.

Here’s a simple example from Nike’s “Make it count” campaign where they used the hashtag #makeitcount to get attention on their campaign:

How to decide which hashtags to use

You know how useful hashtags can be for your social media strategy but how do you know which ones to use? Fortunately, there are lots of tools you can use to help you decide which are the right hashtags to use in your posts.

TweetDeck – This is a great tool to help you monitor the conversations around a specific topic. Start by creating a list of your competitors, which will give you quick access to all their posts from a single place. Then take a closer look at the hashtags they’re using and see which ones are the most popular based on the number of retweets, favourites and comments. This can give you an indication of the type of content your target audience is most interested in.

Trendsmap – This neat tool shows you the most popular hashtags on a map. It’s very useful as it can tell you what are the trending topics that people are talking about in your area. Take advantage of the buzz in a specific location to get in the conversation. 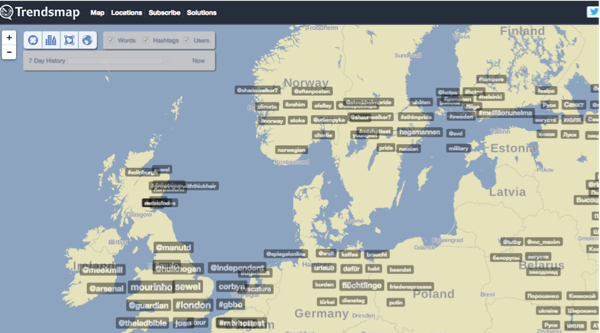 Websta – Another useful tool that allows you to discover popular hashtags on Instagram. You can run a search for hashtags and see the volume of posts per hashtag. You can also check to see which are the most popular Instagram hashtags ranked by popularity.

Creating your own hashtag

Starting your own hashtag can be a great idea if you want to:

If you’re considering creating your own hashtag, make sure:

Using hashtags in your posts can help you increase your posts’ reach and connect with your target audience on social media. Just make sure you’re aware of how they’re used on the different social media channels.

Thanks for your interest in our Gold package, please complete your details and we’ll send across a full breakdown on the services including how they work and the results you’re likely to achieve.
Everything we do at Purehosting is focused on your needs, so one of our team will be in contact to discuss your exact requirements shortly.

Thanks for your interest in our Bespoke package, please complete your details and we’ll send across a full breakdown on the services including how they work and the results you’re likely to achieve.
Everything we do at Purehosting is focused on your needs, so one of our team will be in contact to discuss your exact requirements shortly.

Thanks for your interest in our Silver package, please complete your details and we’ll send across a full breakdown on the services including how they work and the results you’re likely to achieve.
Everything we do at Purehosting is focused on your needs, so one of our team will be in contact to discuss your exact requirements shortly.

Thanks for your interest in our Bronze package, please complete your details and we’ll send across a full breakdown on the services including how they work and the results you’re likely to achieve.
Everything we do at Purehosting is focused on your needs, so one of our team will be in contact to discuss your exact requirements shortly.